Plays, Pageants, and the Origin of the “First Thanksgiving” Story 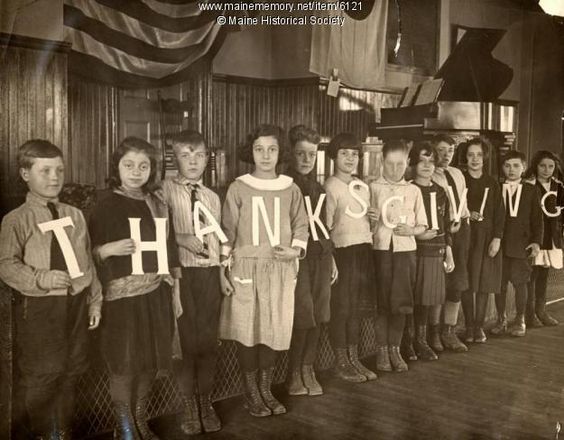 These kids look *thrilled* to be in this Thanksgiving pageant :p. Photo Source: mainememory.net

Ask any schoolchild in America about Thanksgiving, and you’re likely to hear a story about how pilgrims and Native Americans sat down together and had a big, friendly feast. We’ve known for a long time, however, that the real story of the first Thanksgiving isn’t that simple. Yet, every year, tons of children across the nation enact this same scene again and again. Why is that?

The first written account of the story that we’d recognize as the First Thanksgiving comes from a letter published in 1622 by Edward Winslow, one of the original pilgrims. In it, he describes how “many of the Indians coming amongst us…whom for three days we entertained and feasted…and although it be not always so plentiful as it was at this time with us, yet by the goodness of God, we are so far from want that we often wish you partakers of our plenty” (Baker 12). While this indeed sounds like a Thanksgiving feast, it wasn’t recognized as such until 1841, when the Reverend Alexander Young reprinted it his book Chronicles of the Pilgrim Fathers. Underneath a description of Winslow’s experience, Young added that “this was the first Thanksgiving, the harvest festival of New England”—making him the first person to connect the 1621 event directly to the holiday of Thanksgiving (Baker 13).

But nothing came of that connection, really, until the 1890s… 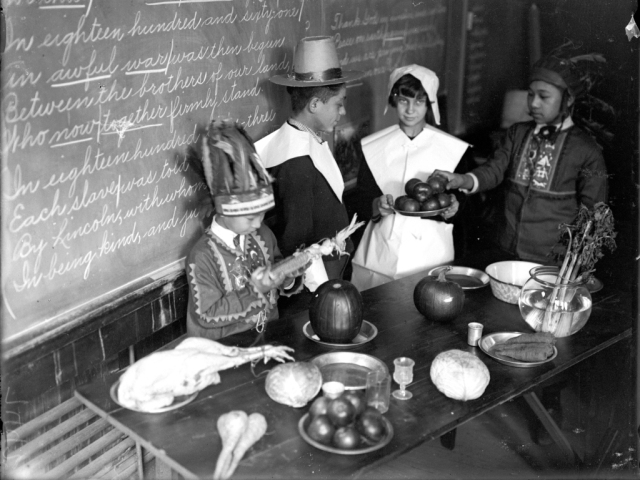 Schoolchildren put on a Thanksgiving pageant, circa 1923. Photo Source: mainetoday.com

The Progressive Era saw the rise of America as a global power, rapid industrialization and urbanization, mass immigration, and increasing gaps between rich and poor—plus a major spike in fear. Many “older” Americans—i.e., white Protestants—were afraid. The America they thought they knew was changing. As a result, many of them had developed a newfound interest in Colonial times as a way to reconnect with their “true” past. According to Baker, “books about life in colonial times enjoyed tremendous popularity,” new houses were built in the Georgian style, and many Americans joined together to create patriotic societies like DAR, or the Daughters of the Republic—societies which deliberately excluded recent immigrants (Applebaum 218). While they didn’t welcome the newcomers, these societies did much to “amplify and venerate the acts of the founders” and helped to “define the hallmarks of Americanism” for everyone—including new immigrants (Applebaum 221).

Rapid assimilation was one way to deal with the new immigrants, and oddly enough, the story of the Pilgrims and the First Thanksgiving seemed tailor-made for them. As James Baker notes in Thanksgiving: The Biography of an American Holiday (2009), “The Pilgrims, refugees from religious persecution in Europe, were perfect models for new immigrants…sober, hardworking, God-fearing…Promulgators of the Pilgrim legend hoped or wished that the ‘wretched refuse’ of Europe’s ‘teaming shore’ immigrating to America would become as sober, hardworking, democratic and—God willing—Protestant as were the Pilgrim role models” (Baker 221). While new immigrants (and thier children) were definitely encouraged to learn and accept this story, many adopted it for themselves all on their own. Coleman says that her own mother, who came over from the Czech Republic, identified with the story. Not only were “the Pilgrims…immigrants too,” but recent immigrants could identify with “their hardship and suffering,” how both sides had to learn from one another, and found the image of friendly Native Americans “undoubtedly reassuring…[as they] hoped that Americans would likewise be friendly to them” (Coleman 72-73).

This Americanization was helped along by Progressive Era schools, which included Thanksgiving as a part of a nationwide educational campaign to instill American values and history into the nation’s young people. Basically, anyone who went to school after 1890 “was exposed to an annual sequence of classroom holiday activities through which civic education and American patriotism were inculcated. As each holiday approached, pupils were taught appropriate stories and songs; set to work to cut, paste, and color decorations; and involved in class exercises that pointed up the particular significance of the occasion” (Baker 116). The educational market flooded with “small, inexpensive booklets” that contained “plays, verse, pictures, and stories for the major holidays” to help them along (Baker 120). As a result, Thanksgiving became one of many holidays that was institutionalized across America, enshrined in children’s textbooks as well as classrooms. By 1926, Thanksgiving had become, more or less, a “suitable day for worshiping the memory of the Pilgrim fathers,” with paintings, odes, and stories about Pilgrims—including pageants and plays about the First Thanksgiving. “Americans,” writes Applebaum in Thanksgiving: An American Holiday, An American History (1984), “were force-fed Pilgrims until it was said that many wished Plymouth Rock had landed on the Pilgrims instead” (Applebaum 221). 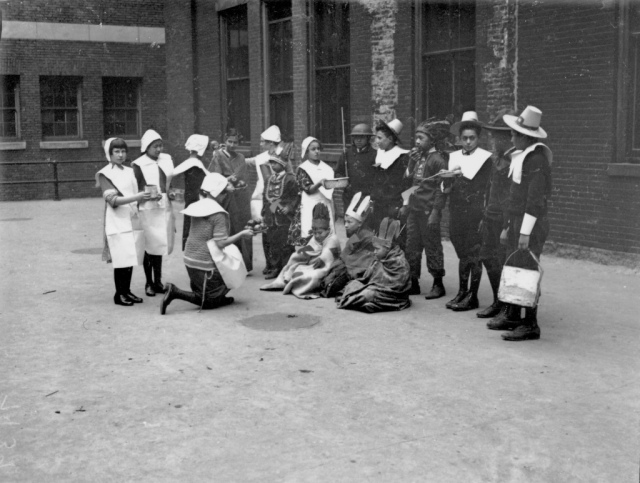 What were these holiday entertainments like? Thanks to the magic of HathiTrust Digital Library, we can examine a range of plays and pageants ourselves. What do we find? All kinds of strange things! These plays contain agricultural goddesses, anthropomorphic personifications of pumpkins, turkeys, Pilgrims, Indians, and…goblins? Read on!

A Pageant of Pilgrims (1920) by Esther Willard Bates

While most of the items I found were for children, this particular one seems to be for adults thanks to its grand scope: tons of actors, music, songs, sets, and special lighting. Interestingly, however, it features “pilgrims of a later day” as well—i.e., immigrants—gathering around Lady Liberty in supplication.

The Romance of the Pumpkin (1920) by Edith Stouffer

More of a pageant than a play, this piece features a Grecian Spirit of the Pumpkin, who shows up in all her finery and parades around spouting poetry about Thanksgiving with the help of some farmers and—I kid you not—the Goddess of Pumpkin Pie. The last half of it is pretty much an ode to “the big, yellow pumpkin, the round yellow pumpkin, the Thanksgiving pumpkin that makes such good pie,” and the virtues of said pie.

When Betty Saw the Pilgrims (1921) by Margaret Howard

Betty is a bored little girl who doesn’t want to go to Sunday School. In response, her mother launches into a rambling story about the pilgrims, ending with the first Thanksgiving.

The Thanksgiving Garden: A Humorous Costume Drill And Dance For Eight Children, Four Boys And Four Girls (1922) by Harriette Wilbur

A simple, cute song-and-dance routine, complete with sheet music and costume instructions, for young children. Each child represents a different vegetable, and do a little dance while reciting a poem.

A widowed grandfather forbids hosting Thanksgiving of any kind…until his charming cousin comes along and changes his mind. Marie Irish seemed to write a lot of these things; Pumpkin Pie Peter is another play of hers as well—one that involves tramps stealing pies.

A Thanksgiving Dream: A One Act Play for Primary Children (1921) by Effa E. Preston

The play follows the disjointed dream of a child named Jack, who falls asleep after eating too much food on Thanksgiving and imagines he interacts with pilgrims, Native Americans, talking pumpkins, carnivorous turkeys, and goblins looking to torment “greedy young people” who ate too much, like Jack. The whole thing ends with a warning to kids not to overeat on Thanksgiving. An odd little piece. ***UPDATE: I stumbled across a much older version of this play shortly after writing this post, and it’s even stranger! Not only is it from 1895, but it features a much bigger cast, many more pages, and TONS more faeries. You can find it here at HathiTrust.***

The Meaning of Thanksgiving Day: A Seasonal Play (1922) by Carolyn Wells

A bunch of Roman goddesses of the harvest are bored on Thanksgiving day, so they decide to go down to the mortal world to see what humans think Thanksgiving means to them. They meet a family of six and ask them each in turn. Mother, a “housewifey type,” says she’s excited to make food for her family from the bountiful harvest: “And the mother’s face is smiling bright, with honest pride aglow, / When she views her tempting pantry shelves, with goodies all a-row!” Grandmother promotes hospitality for all, as “the good Book states.” Father says the best way to thank the harvest is “to replant our garden every year.” Son recommends conserving the harvest for the good of the nation, and Grandfather praises God. But it’s Daughter, in her “attractive sport suit,” who puts them all straight:

Thanksgiving Day’s a day of thanks, ’tis true;

But is this not a day of giving, too? Thanks-giving Day!

When that phrase you have heard,

A day of thanks uses but half the word.

Let’s use the rest! You see? A day of giving!

Isn’t that so? As true as that you’re living!

And while in gratitude you praise and pray,

Your Thanks Day should also be a Giving Day.

You see the point, you understand, I’m sure;

Give of your bounty, give it to the poor.

Give food and clothing, give them coal and wood,

Give them—Oh, give them anything that’s good!

Fill a big basket from your storeroom shelf

And carry it to somebody yourself!

Give jellies to the sick, flowers to the sad,

Give anything that will make some one glad;

Give a cash present to a needy friend,

Don’t be afraid that such things will offend,

For, if the spirit of the gift is right,

Get busy at this giving, every one!

There’s so much giving waiting to be done!

Let every one of us pick out some way

To put the “Giving” in Thanksgiving Day!

—The Meaning of Thanksgiving Day: A Seasonal Play (1922) by Carolyn Wells, page 14

In today’s classrooms, things are a bit more balanced. While the old story is still going strong, teachers can use new educational guidelines such as this one to give a more nuanced view of the history behind Thanksgiving—including the fact that Native Americans aren’t necessarily a fan of this holiday. However, whether the history behind it is true or not, the feelings Thanksgiving tries to foster in Americans–togetherness, generosity, thankfulness—are something we could all use more of that these days.

So in light of that, let me wish you all…

My name's Megan, and I'm a writer with an interest in history. While I might not be a real historian, I'm a very thorough researcher. This blog is my place to post about all the interesting historical tidbits I find that can't use in the novel I'm working on, which takes place in Chicago in 1927. If you're looking for research help, writing feedback, or just want to say hi, feel free to drop me a line! :)
View all posts by lupachi1927 →
This entry was posted in holiday post and tagged 1920s Americanization practices, 1920s Thanksgiving, Thanksgiving pageants, Thanksgiving plays. Bookmark the permalink.

3 Responses to Plays, Pageants, and the Origin of the “First Thanksgiving” Story