How to Make a REAL 1920s Halloween Costume…if you dare! 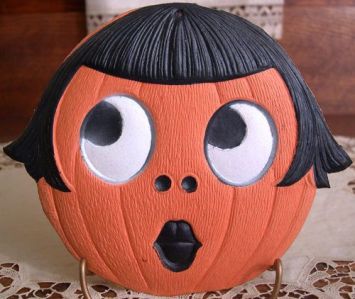 Before mass-produced costumes entered the scene, Halloween costumes were a lot more…creative. Forced to make their own masks, dresses, and props–often using highly questionable crafting skills—adults and children across the nation created costumes that were creative, bizarre, and often a LOT more scary than ones we see today. Want to tap into a wellspring of vintage creativity this Halloween? Then ditch those tacky flapper and gangster costumes and follow these steps to create a truly authentic 1920s Halloween costume…

STEP ONE: PICK A POPULAR COSTUME

Guess what the most popular costume choice was during the 1920s? Oddly enough, it’s the one that we’ll probably see stalking the streets this year—only it won’t be this cute:

Clowns! Costumes of Perriot clowns in particular—the white and black mimes with sad faces—were all the rage during the 1920s with both men and women.

Check out this cute couple:

This is a nice vintage Halloween shot. Check out her candle, the basket of walnuts, and the lacy tablecloth—definitely a homemade Halloween party! Photo Source: vintage every day

Kids got in on the act, too:

They don’t seem to like their costumes much, though. Photo Source: Pintrest UK 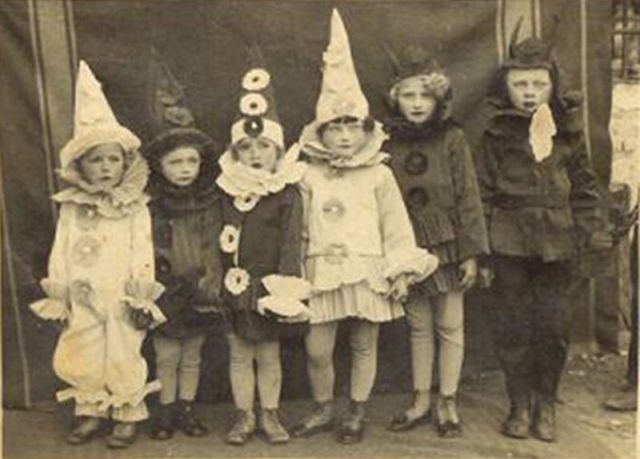 Neither do these kids! Photo Source: vintage every day

Don’t want to be a clown? If you’re a woman, you could always go the witch route. The shapeless drop-waist dresses and skirts popular during the Roaring Twenties lent themselves easily to witch costumes, so they were pretty easy to manage. Throw on a plain black dress and a pointy hat, and ta-dah, you’re a witch!

A homemade witch costume from the 1920s. Photo Source: vintage every day

But maybe standard fare isn’t for you. Maybe you want something more topical. So why not go as…the Spirit of St. Louis? 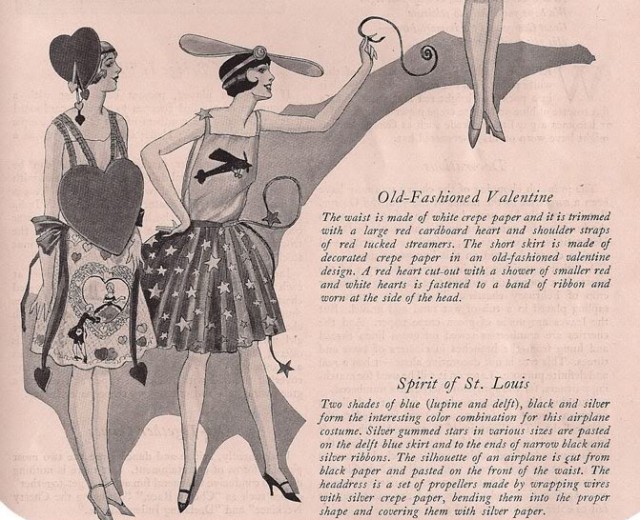 And they say that topical costumes didn’t exist until the 1970s. Lies! Photo Source: vixenvintage at Photobucket

If none of these costume ideas work for you, though, you could always buy one. While everything I read said that true mass-produced costumes didn’t exist until the 1930s, I found evidence of them being sold in department stores during the mid to late 1920s. Both of these Chicago Tribune ads sell Halloween costumes: 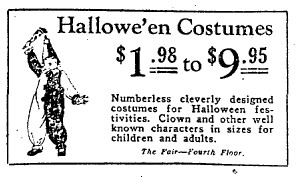 This October 24th, 1926 ad shows us that mass-produced costumes existed in some fashion during the late 1920s. Photo Source: Chicago Tribune Archives

So, you could buy a costume. This makes sense, too, seeing as it was the 1920s that saw the birth of Halloween parties, particularly among the rich and middle class, that often required one come in costume. It seems people had more fun making their own costumes, however—and to do that, they used stuff like…

As I’ve said in other holiday posts, crepe paper was BIG during the 1920s. Every single thing I’ve seen regarding holiday decorating in the Chicago Tribune during that time mentions crepe paper. Apparently, people were really, really excited about it—and popular booklets like The Bogie Book (1926) helped to spread the love. Created by paper product supplier Dennison Manufacturing Company, the book demonstrates how crepe paper could be used to make Halloween costumes, decorations, and many other things. Their book featured charming costumes for adults and children, all supposedly made out of crepe paper. Take a look: 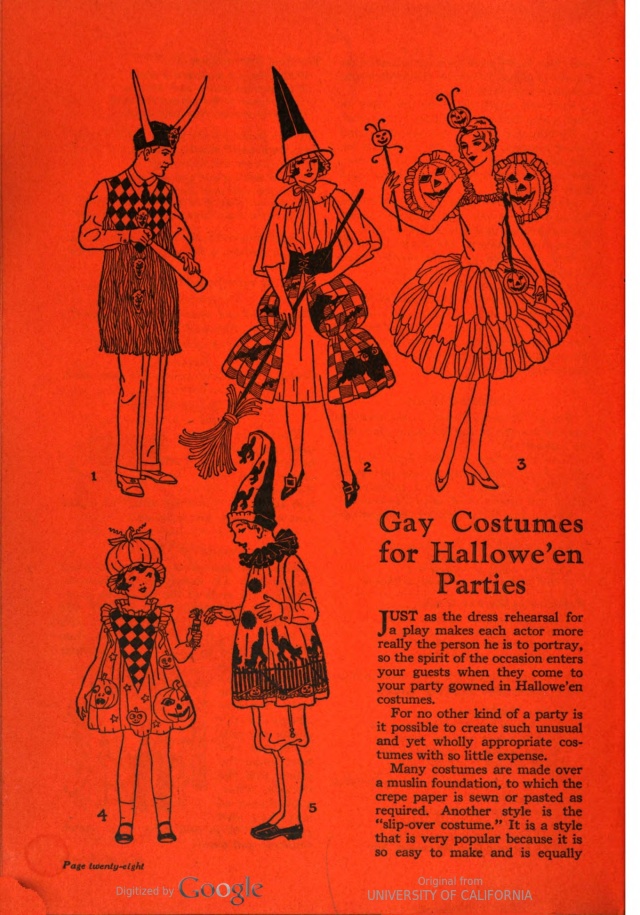 And these lovely detailed things were made out of paper. Paper!!!

Crepe paper wasn’t a horrible choice of material, however. Not only was it light, cheap, colorful, and fairly plentiful, it actually held up pretty well to rough play—provided you didn’t get it wet—which made it excellent for children’s costumes.

It was also useful for making “slip-over” costumes, which, as the name implies, allowed one to slip the costume over regular clothing, leaving a hole for one’s head, then tie it at the waist, creating something a bit like a poncho with a belt. Thanks to its ease of wear, this style of costume was particularly popular with young children. As the Bogie Book tells us, “the slip-over is the most popular kind of costume because it is so simple and inexpensive to make and because it is equally appropriate for either girls or boys.” However, as you may have noticed—literally none of the costumes above look like a simple slip-over! That’s because their simple bases have been heavily embellished by professional designers (I doubt anyone actually succeeded in making them look like these drawings). To understand better how these costumes were constructed, check out this pattern for a rose costume from another Dennison book, How to Make Paper Costumes:

See how this costume starts with a simple base and moves on to something more complicated? Photo Source: How to Make Paper Costumes, 1922, HathiTrust Digital

If you were willing and able to sew fabric, however, your Halloween costume options increased dramatically. Check out these lovely sewn examples:

These costumes for men and women are interesting and unusual from a design standpoint, compared to today—check out the bat! Photo Source: Pintrest 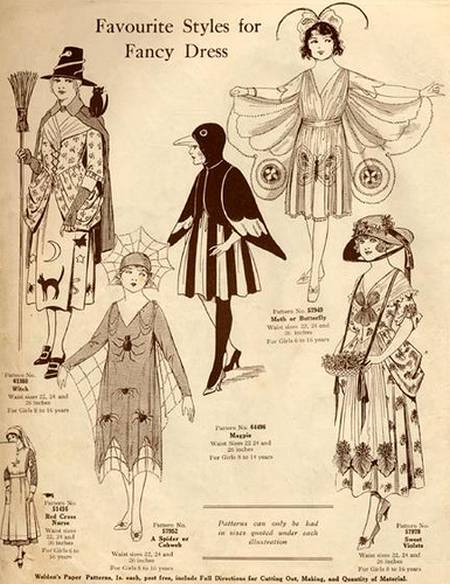 More patterns from the 1920s. There’s even a Red Cross Nurse!  Photo Source: Vintage Every Day

Clothing was only part of your costume, however. What about a mask?

Before the advent of mass-produced masks, people made their own masks out of paper mache and fabric. Thanks to questionable crafting ability, these often turned out looking probably waaaay more creepy than intended. Check these scary photos from the 1930s:

Some creepy kids having a Halloween seance. I think the one on the far right is a duck? Photo Source: An Appendage Blog

While some of these costumes are definitely racist, the range of roles—clowns, Native Americans, policemen—are interesting. Photo Source: An Appendage Blog

I think it’s a ghost? Maybe? Or a Satanic alchemist, it’s hard to tell. Photo Source: vintage every day

But if you didn’t want to use paper mache, you had another option: yet MORE crepe paper! (Sensing a theme yet?) These freaky-looking crepe paper masks come from The Bogie Book:

Want to make your own mask? Try these instructions at Instructables.com for a basic face mask, or these ones at UltimatePaperMache.com for more elaborate, sculpted masks.

STEP FOUR: GO OUT ON THE TOWN!

Now that you have a costume, you’re ready to out and have fun! During the 1920s, children roamed the streets in costume, burning stuff and trashing the place, until adults instituted more controlled celebrations in the form of parties and events at schools, churches, and other public areas, as well as at home. Adults, meanwhile, went to fun, lavish costume parties, full of dancing, festive treats, and party games. All ages enjoyed showing off their costumes and playing at being someone else for the night. 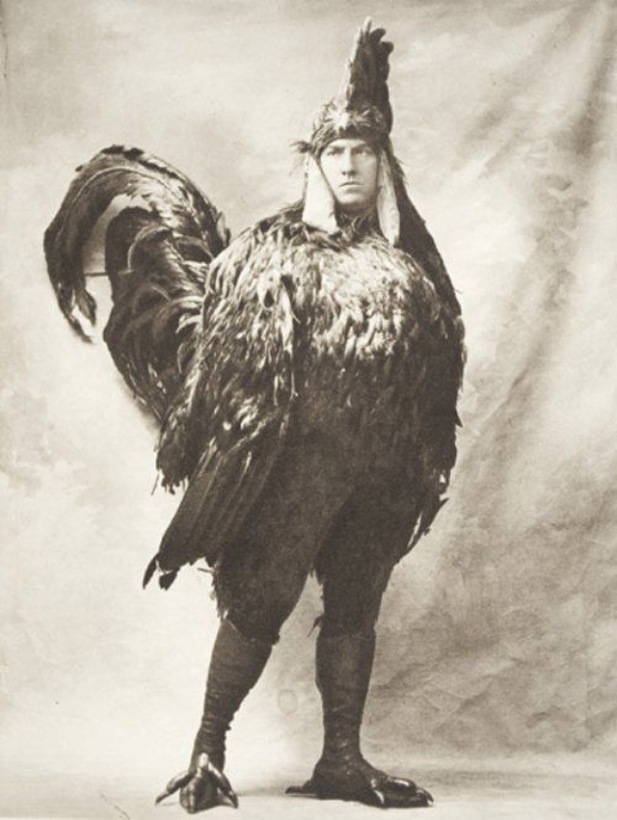 This hilarious costume awaits you at the following links!

My name's Megan, and I'm a writer with an interest in history. While I might not be a real historian, I'm a very thorough researcher. As an amateur historian, this blog is my place to post about all the interesting historical tidbits I find that can't use in the novel I'm working on, which takes place in Chicago in 1927. If you're looking for research help, writing feedback, or just want to say hi, feel free to drop me a line! :)
View all posts by lupachi1927 →
This entry was posted in holiday post, list post and tagged 1920s Halloween, 1920s Halloween costumes, Bogie Book 1926, vintage 1920s Halloween costumes. Bookmark the permalink.

6 Responses to How to Make a REAL 1920s Halloween Costume…if you dare!