There Goes the Neighborhood: Al Capone’s House Has Finally Been Sold!

Al Capone’s House is officially off the market—

and for double the asking price! 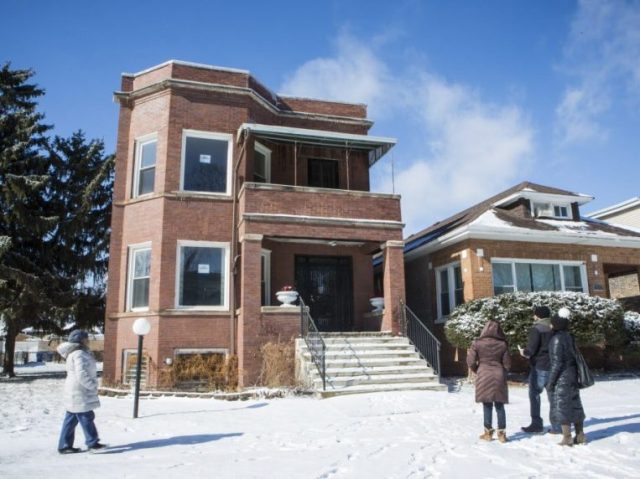 Well, dear readers, it finally happened! Al Capone’s family home at 7244 South Prairie Avenue, the travails of which I’ve posted about on numerous occasions, was officially sold on April 5th, 2019, to the tune of $206,000. That’s more than DOUBLE the asking price of $109,900 back in February—and in two months, no less! That’s a pretty terrific turnaround for a property that’s been struggling on and off the market since 2009, thanks in a large part to the notoriety of its former owner. According to the Chicago Sun Times, the price of the home steadily dropped “from about $450,000 to $179,000,” and it had gone into foreclosure more than once. Such prices are a far cry from the $15,000 Al paid for it back in 1923, when he bought it for his family to live in while he worked as Johnny Torrio’s right hand man downtown.

As you’ve seen in my previous posts, the 1905 home is pretty rundown inside, but one hopes that the new owners will keep a few of the more unique features—like the barred living room windows—around for the sake of history and flavor. However, given that it’s apparently been sold to “investors” rather than “end users” (i.e., homeowners), the future of Al’s former home is unclear. Real estate agent Ryan Smith of Re/Max said that the continued press on the property “helped it out” considerably, leading to over 80 offers and tons of interested phone calls. Smith says he has “no idea what the buyers want to do with it,” but that it “needs updating” if it’s to be livable.

Personally, I hope that whoever bought the place isn’t planning to tear it down. That fate might be in store for some lovely old Chicago mansions in the Lakeview neighborhood, however. Gorgeous homes akin to this one at 530 W. Hawthorne Place and this recently purchased location are getting quietly bought up by the Chicago City Day School, an expensive independent children’s school that is located within Lakeview.

According to a 2011 post at Connecting the Windy City, the Day School has a “track record…with destroying historic buildings” in the area, a feat which goes back to the 1996 destruction of an 101-year old coach house at 541 W. Hawthorne, which was done via a surprise permit issuance from a “high level building department official” in defiance of neighborhood residents, preservationists, and Mayor Richard J. Daley himself.1 The demolition came about from a loophole in the landmark preservation laws at the time, which apparently preserved the mansion but didn’t apply to the historic coach house, even though it was part of the same property. As a result, the school destroyed it, and then went on to file an “economic hardship claim” that same year for a different property, stating that “keeping the structure [viable] would cause economic hardship” for the school.2 It’s very likely, then, that they are planning a similar fate for more nearby historic properties. According to a discussion in a local Chicago history Facebook group, its likely that they’ll wait to do so until the historic designation expires in 2053, then move to bulldoze it after it’s fallen into disrepair. While I hope they turn these homes into school buildings rather than parking lots, it seems unlikely.

Al’s place doesn’t have a leg to stand on in that regard, however. The 1989, Capone’s Prairie Avenue home was up for consideration by the National Register of Historic Places, after being roundly rejected by Illinois’ historic site boards. The move was loudly protested by the Italian-American community across the nation. They were “fed up with being associated with Capone,” found Al’s conduct shameful, and did not want to experience the “guilt by association” that the potential certification of his home could bring to their ethnic group in the city and beyond.3 In response to the outrage, the bid flopped, and Al’s former home went back into private hands.4

Regardless of the building’s history, I hope they decide to do something worthwhile with it, rather than just bring out the bulldozer. Chicago’s historic buildings have enough challenges to deal with as it is, and while Al’s place isn’t an official landmark, it’s still an important part of the city’s history. It would be a real shame to see it go.

My name's Megan, and I'm a writer with an interest in history. While I might not be a real historian, I'm a very thorough researcher. As an amateur historian, this blog is my place to post about all the interesting historical tidbits I find that can't use in the novel I'm working on, which takes place in Chicago in 1927. If you're looking for research help, writing feedback, or just want to say hi, feel free to drop me a line! :)
View all posts by lupachi1927 →
This entry was posted in Al Capone and tagged Al Capone, Al Capone home, Al Capone house for sale, Chicago historic landmarks. Bookmark the permalink.

2 Responses to There Goes the Neighborhood: Al Capone’s House Has Finally Been Sold!