Check Out These Sweet Links! 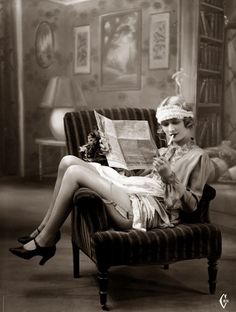 Hey guys! I’m on vacation this week, so I thought I’d post a bunch of fun, interesting news links about various 1920s topics for your perusal instead. Thanks to the joy of Google Alerts, I often end up with links to interesting articles that I can’t always work into posts, so I figured I’d post some of the more interesting or strange ones here for you.

Think driverless cars are new? Think again! “Phantom autos” existed during the 1920s, and could be controlled from up to 5 miles away with radio frequencies.

Sociologists at Yale and the University of California think they figured out how Prohibition really strengthened organized crime: with the power of social networks! According to the Yale researchers, if you were a bootlegger in Chicago, that really meant knowing only one person: Al Capone. His thousands of social connections turned Chicago into a Prohibition hub.

Beef and bananas: a match made in food heaven, or a terrifying relic of 1920s cooking? You decide!

Find out how Al Capone rigged roulette tables at his gambling establishments.

Apparently the news lost its shit when it found out that some teenager spotted an inaccurate radio inside Capone’s former jail cell at Alcatraz. Seriously, I got articles about this for DAYS from Google Alerts. It was annoying.

Looking for a new video game featuring gangsters? Check out Blues and Bullets, a neo-noir episodic video game sold on Steam. Set in an alternate 1955, the black and white atmospheric art style recalls Frank Miller’s Sin City, which almost takes the sting out of the fact that your player character is none other than Grade A asshole Eliot Ness…sigh.

Someone made a documentary about John R. Brinkley called “Nuts!” Who was John R. Brinkly? Well, remember my post about Voronoff and the Monkey Gland Cocktail? Well Brinkley puts Voronoff to shame and then some—using goat testicles. While selling his “treatments,” he went on to found a multi-million dollar empire, create the first country music station, and became an advertising genius…and did it all without actually being a real doctor! His crazy rise and fall is chronicled in the excellent book Charlatan by Pope Brock.

Electrocuting people: the best prank of the 1920s?  Also contains a reference to monkey glands!

1920s baby names are making a comeback thanks to this Bustle article!

Bustle also highlighted the 9 most “scandalous” dresses from the 1920s

A British robot from the 1920s is getting a second chance at life thanks to London’s Science Museum. You can see video of Eric moving about in 1928 here.

The 100 best stories from the early years of sci-fi, known as the Radium Age, which featured strange occult powers, proto X-men, robots, and technocratic utopias.

In Canada, Budwieser has made “Prohibition Beer,” or beer with no alcohol content. Why???

Got any interesting 1920s news bits? Feel free to post links in the Comments section. I’d love to see them! 🙂

My name's Megan, and I'm a writer with an interest in history. While I might not be a real historian, I'm a very thorough researcher. This blog is my place to post about all the interesting historical tidbits I find that can't use in the novel I'm working on, which takes place in Chicago in 1927. If you're looking for research help, writing feedback, or just want to say hi, feel free to drop me a line! :)
View all posts by lupachi1927 →
This entry was posted in link post, list post and tagged 1920s baby names, 1920s recipes, Al Capone. Bookmark the permalink.

3 Responses to Check Out These Sweet Links!