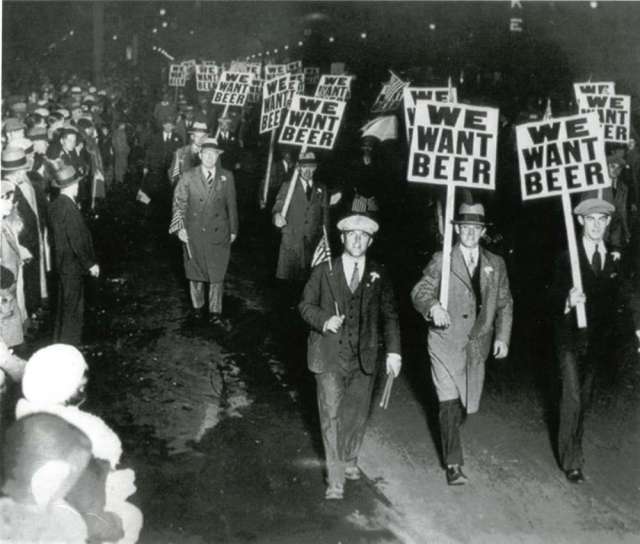 Well, according to NationalDayCalendar, this day was created to celebrate bootleggers and their various attempts to fulfill America’s demands for alcohol throughout Prohibition, whether through smuggling it in or distilling their own. Interestingly, the holiday appears to have been invented entirely by Templeton Rye, a Prohibition-era whiskey company with roots that go back to Capone himself. Advertising themselves as Al Capone’s favorite whiskey, Templeton Rye started back in Templeton, Iowa just after the Volstead Act kicked in. While the company claims the recipe comes from Alphons Kerkhoff—the grandfather of one of the company founders—in reality it seems the entire farming community of 350 people was involved in some way. Helen Kasparbauer, a resident of the town, can remember watching her father bury bottles of the stuff in the winter, then wait until spring to go dig it up and sell it: “he drove the pickup and I went along and then he would bury it along the road where the snow was blowing over it…he knew just when it was time to thaw. Then he would take care of it and put it someplace else.” According to Meryl Kerkhoff, illegal whiskey was what got his family through the Great Depression: “the hard times were really hard in ’31 and ’32, so he had to do something,” he said of his father, Alphons–and in his case, that something was whiskey. And the stuff sold pretty damn well, too. According to an early edition of the town’s website, the stuff sold for $5.25 to $5.50 a gallon—a pretty penny back in that time, but considering the quality of the product, no one minded paying extra. “The Good Stuff” was so good, it was supposedly the only whiskey Al would distribute within his empire besides the legit stuff imported directly from Canada, and the only one he’d serve to family and friends in his own home, according to Keith Kerkhoff, one of the owners I heard speak years ago at the Chicago History Museum during one of their annual The Last Speakeasy events.(1) Interestingly, however, it seems it’s impossible for the Kerkhoffs to use the “original” family recipe, as it naturally doesn’t adhere to federal requirements. So instead the whiskey itself is created from stock rye recipes in Indiana and then “blended” with other whiskeys and “ingredients that augment the taste,” attempting to get “as close as we can to the recipe that Keith’s father had” (ironically, this is very similar to the bootlegging practice known as “needling”. With needling, a bootlegger (or a speakeasy owner, if they were really hard up for booze), could take a keg of near beer and shoot it up with a needle or two’s worth of high-octane distilled alcohol to give it some “kick” and stretch one’s supply of booze). While this revelation forced Templeton to redesign their bottles in 2015 after being sued for false advertising—adding “distilled in Indiana” and removing “Prohibition Era recipe” and “small batch brewed” from their labels—it hasn’t seemed to slow their sales much. Today, the whole town is still heavily involved in the production of rye whiskey. Not only does the company keeps their headquarters and bottling plants in town, but they are the town’s largest employer as well, and the town’s website boasts about their involvement in bootlegging back in the day.

But why pick January 17th for National Bootlegger’s day? Type “when did Prohibition begin” into Google and you get January 16th, 1920—not the 17th. Poking around the Tribune archives, I originally came to the same conclusion. As Tribune reporter Arthur Shears Henning lamented on December 16th, 1919, “today…the possibility of a ‘wet’ Christmas went glimmering. There is apparently no chance for a ‘wet’ holiday of any sort before constitutional prohibition goes into effect on Jan. 16.”(2) However, it appears the law didn’t go into official effect that day until “12:01 AM,” when law enforcers would “take up the burden” and start enforcing the law, since “‘reasonable’ men say they believe nobody should start a new job until at least 8 o’clock in the morning.”(3) So, technically speaking, I guess you could say that it started on January 17th…but there are better reasons that Templeton chose that particular day to celebrate.

So why not join me in saying happy birthday to The Big Fellow? He would have been 117 today. You can even raise a glass to him, if you’d like—with a glass of Templeton Rye, naturally! 😉 In fact, here’s a Midwestern Manhattan recipe from Esquire using that very same drink:

Combine Rye, vermouth, and cherry juice in cocktail shaker and shake vigorously. Pour into glass over ice. Add dash of bitters, then cherries, and serve.

And to be honest, if you’ve never had Templeton Rye before and you like rye whiskey, I would recommend it. It’s very smooth, and it blends well with lots of things—making it great for cocktails! 🙂

(1) For those who don’t know, it’s an awesome event where you come in costume, get to dance and drink, and listen to speakers talk about Chicago’s Prohibition era past. Not only did we get to drink copious amounts of Templeton, we got to learn about how it was made and its connection to Al. Plus—and this was the real reason I went—Deirdre Capone was there to talk about her book!!! For those who don’t know, she was Al Capone’s niece (Ralph was her father), and one of the few people who remembers him as something else than a notorious criminal. Her wonderful short memoir, Uncle Al Capone, goes a long way towards humanizing Al—something his biographers often fail to do. The evening was quite a lot of fun, though, and I’d recommend it if you’re ever in Chicago during that time, you should go! There was even a fake “raid” halfway through the drinking/dancing, with fellas in fake police uniforms coming in to “arrest” you. It was a hoot! 😀

My name's Megan, and I'm a writer with an interest in history. While I might not be a real historian, I'm a very thorough researcher. This blog is my place to post about all the interesting historical tidbits I find that can't use in the novel I'm working on, which takes place in Chicago in 1927. If you're looking for research help, writing feedback, or just want to say hi, feel free to drop me a line! :)
View all posts by lupachi1927 →
This entry was posted in 1920s criminals, Al Capone, bootlegging, drink recipes, holiday post, Uncategorized and tagged Al Capone birthday, beginning of Volstead Act 1920, Midwest Manhattan recipe, national bootleggers day 2016, Templeton Rye bootleggers. Bookmark the permalink.

2 Responses to Raise a Glass: Today is National Bootlegger’s Day…and Al’s Birthday, Too!