Have Yourself a Roaring Twenties Christmas…

Looking to add a dash of 1920s glamour to your holiday festivities? Then look no further than this list, which offers tips, tricks, tons of photos, and even a recipe or two to jazz up your Christmas—most of which you can find in Susan Waggoner’s wonderful vintage craft book, Have Yourself a Very Vintage Christmas: Crafts, Decorating Tips, and Recipes, 1920s-1960s (Stewart, Tabori & Chang, 2011).

According to Waggoner, the biggest color of the Christmas season throughout the 1920s was RED. Green was rarely featured. Other than that, Waggoner says that more than any other decade, the Roaring Twenties featured non-traditional colors for Christmas, such as “fashionable” pastel colors like “lavender, pale robin’s egg blue, cream and rose.”(1) Colors intensified over the decade as Art Deco style began to trickle into the mainstream, but for the most part, red ran the show.

Red paper honeycomb bells, like this one from UK-based Party Place, were a popular Christmas decoration in 1920s homes. Photo Source: PartyPlace

As the picture above might indicate, decorations largely consisted of brightly colored red and green paper, with an emphasis on the red of course. Red honeycomb bells, like the one pictured above, were very popular, and often set in the center of the ceiling while the rest of the room was strewn with colored crepe paper streamers and the like. Colorful crepe paper was also big, as it was at every holiday during the 1920s (I can’t tell you how many Tribune articles I read about decorating for the holidays, or any other event really, that mentioned “festive crepe paper” as a key decorating element, whether for a wedding or on Halloween).

As for decoration themes, Merry Old England and Charles Dickens were extremely popular, as evidenced by Christmas cards of the time, which often looked like this:

Found this on Etsy somewhere, but the link seems to have died. I suppose it was sold. Anyway, a nice example of a Dickens-themed card.

Why this emphasis on Dickens and England in America? According to Waggoner, “after the shock of World War I, people craved the comfort of more innocent times”–and they found it in Charles Dickens’ writing and whatever bits and bobs of Ye Olde English holiday paraphernalia they could get their hands on.(2) Popular motifs included carriage lanterns, English holly, and fireplace mantles with elaborate antique candle holders, the kind with the curling handles and so on. Images of hearth and home, emphasizing the “homey coziness” aspect of Christmas, were also very popular.

Unlike today’s Christmas trees, 1920s Christmas trees looked rather different. For one, they were often short, round and fat, with a full, branchy look that frankly has more in common with a bush rather than the Christmas trees we see today. Part of the reason this is so is that people often chopped off the top of the tree, too, in order to emphasize its fullness.

As you can surmise from this photo, popular forms of tree decorations included: glass balls, glass ornaments in festive shapes, paper mache Santas, small toys, die-cut images on heavy cardboard, and, of course, glittering garland! Most Roaring Twenties trees were decked out like over-excited flappers and absolutely dripped with the glittery stuff, with most trees having up to seven different kinds of garland hanging off them in big enthusiastic loops. While some garlands were made of simple paper mache balls and glitter, more expensive ones might be made of glass beads. Lametta, a precursor to tinsel, was also popular. When combined, the look was quite sparkly and bright, especially in the light of a roaring fireplace—a rather nice effect, considering one lacked Christmas lights at this point in time. 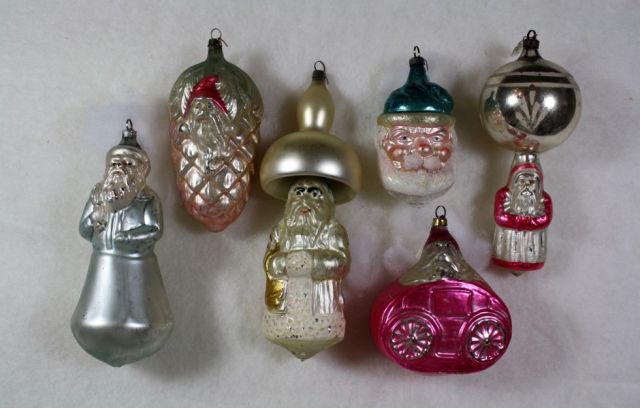 Besides glass ornaments like the ones shown above, other things one might find on a 1920s Christmas tree were children’s toys and packaged food. Children were encouraged to decorate the tree with small toys, and packaged treats—Animal Cracker boxes have a string because they were originally meant to hang on Christmas trees (3)—were hung on the tree for them to find on Christmas morning.

One of the most unique aspects of a 1920s Christmas tree, however, was what you could find beneath it. Rather than piles of presents, Roaring Twenties Christmas trees often hosted a putz. A putz is a landscape in miniature. Today they are mostly represented by Christmas villages, but during the 1920s they often depicted scenes from the Bible, with Noah’s Ark being a popular choice. Children’s toys were often used to create these tableau, which were large affairs with risers, sheets, and landscaping attempts. The 1923 Christmas tree photographed above is a good example (and seems to depict Noah as well), but there are a lot more photos of them here, plus another one here:

This is a truly magnificent putz! Also from here

As for presents, wrapping paper was just coming into existence. According to Waggoner, wrapping paper appeared in the early 1900s and by the 1920s you could get it in only two styles: red holy sprigs or green holy sprigs.(4) Most people just went with “brown paper packages tied up with strings,” as the song goes—namely brown paper and butcher’s twine.

In keeping with the Merry Olde England theme, according to the Tribune archives it seems it was toss up between traditional plum pudding and fruitcake as the most requested holiday recipes. Returning once again to Jane Eddington’s awesome cooking articles for the Chicago Tribune, I scoured the archives to find a simple recipe to share with you all. While I found many, many articles extolling the virtues of plum pudding and all the different ways one could make it, I felt this one might be the best to share (though it lacks a temperature setting for the oven, naturally). Eddington assures her readers that “no single recipe has had wider acceptance than this recipe for ‘little batter puddings’ with interchangeable fillings.”(5)

Put a tablespoon of this batter into a buttered cup (probably a muffin tin will do) and add 1 tablespoon of raisins, shredded dates, or apples (though she says raisins are “best for Christmas”). Cover filling with another tablespoon of the batter and then decorate the top with shredded almonds or “decorate in a little pattern with one red cinnamon drop and two or four leaves of angelica.” Bake for half an hour. Plate each pudding with a sprig of holly and a serving of hard sauce, if you like.(6)

Sending holiday greetings to friends and family was very popular during the 1920s. Dickens-style images predominate, but so do scenes of children playing, highly stylized images of flappers and sheikhs, Snow Babies, and the slow and steady rise of Art Deco style that would culminate in the 1930s. Check out these fun examples below: 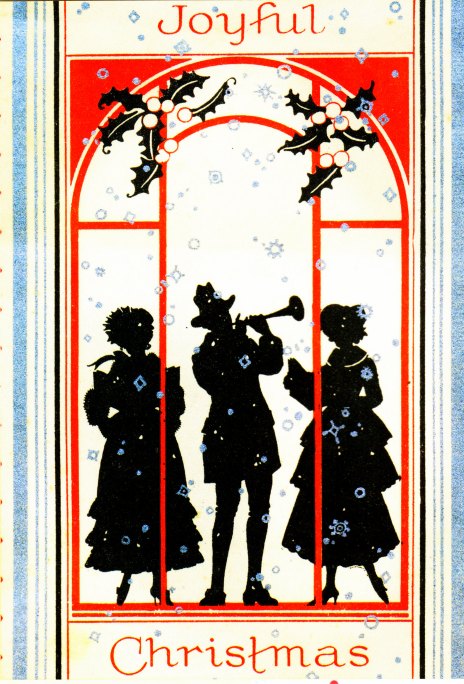 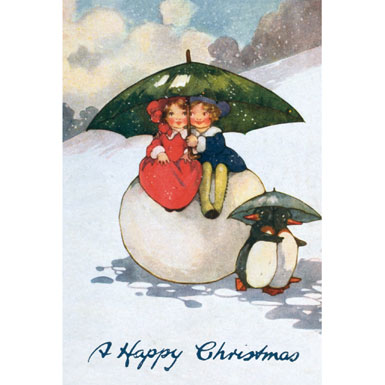 Cute children AND penguins. What more could you ask for? Photo Source here

The site I found this claimed its from the 1920s, but the Scottie motif is terribly 1930s according to my research. However, it was too cute to pass up! Photo Source here

Not only does this feature a young couple, but it also references the stock market BEFORE the Great Crash, back when no one thought it would ever end. Photo source: Flickr

SeasonalWisdom has a good entry here and here.

Want to send your own vintage Christmas card to your friends and family? Check out Hallmark’s “time machine,” featuring vintage style e-cards from the 1920s through the 2010s.

Listen to some vintage 1920s Christmas song recordings over at yuleplay!

So I stumbled upon this link entirely by accident, and I can’t recommend its photos highly enough—they’re all high quality photos of Christmas trees and Christmas store displays from the 1920s, all courtesy of CardboardChristmas.com. Not only do you get a strong sense of how families celebrated Christmas in the 1920s, but the store displays are often kind of insane, including this gem that I couldn’t resist putting in here, just because it reminds me of the Field Museum where I volunteer: 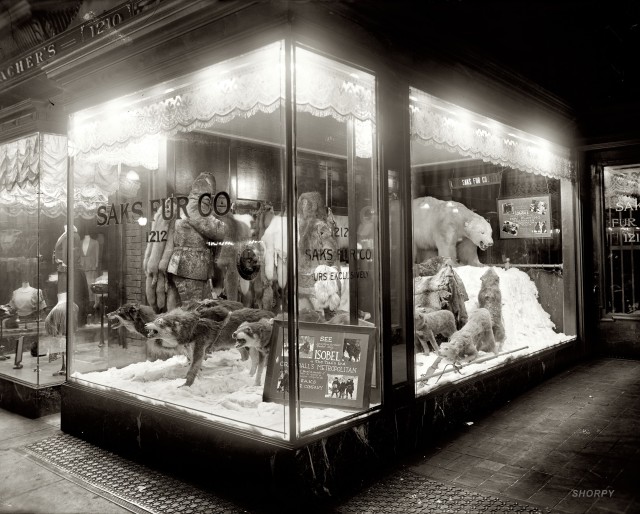 Can you guess what this is? It’s a storefront for Saks Fifth Avenue from 1920! Isn’t it amazing? Anyway, you should really check out the rest of the photos here!

Hope you all have a very happy holiday!

My name's Megan, and I'm a writer with an interest in history. While I might not be a real historian, I'm a very thorough researcher. This blog is my place to post about all the interesting historical tidbits I find that can't use in the novel I'm working on, which takes place in Chicago in 1927. If you're looking for research help, writing feedback, or just want to say hi, feel free to drop me a line! :)
View all posts by lupachi1927 →
This entry was posted in holiday post, list post, Social Customs of the 1920s, Uncategorized and tagged 1920s Christmas, 1920s Christmas cards, 1920s Christmas trees, Roaring Twenties Christmas. Bookmark the permalink.

7 Responses to Have Yourself a Roaring Twenties Christmas…